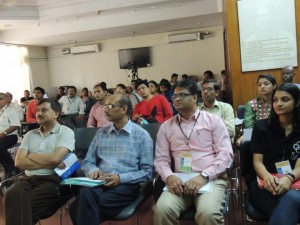 In his talk “Mathematics in Nepal”, Prof S. M. Maskey, described the education system in general and mathematics education in particular, in Nepal during different periods of time. According to Prof Maskey, Nepal lacks expertise and there is in tremendous need of motivation among young faculty and research scholars. He felt that the establishment of SAU should cater all such needs of all SAARC nations. In this regard, he appreciated the initiative taken by the department of mathematics for organizing this workshop and suggested that sequels of this workshop should be organized year after year, preferably, in different SAARC countries under the leadership of SAU. Prof Kumudu Mallawa Arachchi of University of Kelaniya, Sri Lanka also endorsed this idea and told that, in Sri Lanka, not many universities have even master’s programme in mathematics which is an essential ingredient of any academics. Prof Kumudu told that holding such workshops in Sri Lanka would definitely help in this direction.

Financially supported by SAU, DST, CSIR and DRDO, the workshop was a big success.