Faculty of Social Sciences, at South Asian University, initiated the annual program ‘Contribution to Contemporary Knowledge Series’ to execute the vision of synergetic regional scholarship. This program envisages bringing eminent scholars of the region who have made it to the international repute and have earned worldwide acceptance of their scholarship. First in the series was a public lecture by Prof. Gananath Obeyesekere, former Professor Emeritus of Anthropology at Princeton University and currently based in Sri Lanka, on 31 Janaury at Teenmurty Auditorium. The enormous scholarship of Prof. Obeyesekere encapsulates the themes from mythology, history, culture and religion in the framework of South Asia with specific focus on Sri Lanka and its historical intersections with India. The stature of Prof. Obeyesekere evokes reverence and awe in the domain of scholars of the region. The lecture had in attendance scholars such as historian Professor Romila Thapar, amongst other noted socials scientists from the leading varsities of India. The title of the lecture was ‘Coming of Brahmin in Sri Lanka: Sudra fate of the Brahmin Elite’, which explored the shared history and mythology of India and Sri Lanka. Prof. Obeyesekere noted the evolution of Sinhala Buddhism with reference to ancient texts and showed that Sinhala Buddhism has posterity of fusion of religious and cultural motifs. It emerged from the lecture that the contemporary version of Sinhala Buddhism, which has been bane of Sinhala society and politics, is not what all Sinhala boasted of; it was rather a consequence of syncretism and tolerant acceptance of elements from Tamil Brahmins who came to Sri Lanka in distant past. An exclusivist Sinhala Buddhism is only a political invention to suit the agenda of identity politics and propaganda of politically questionable Buddhist country. 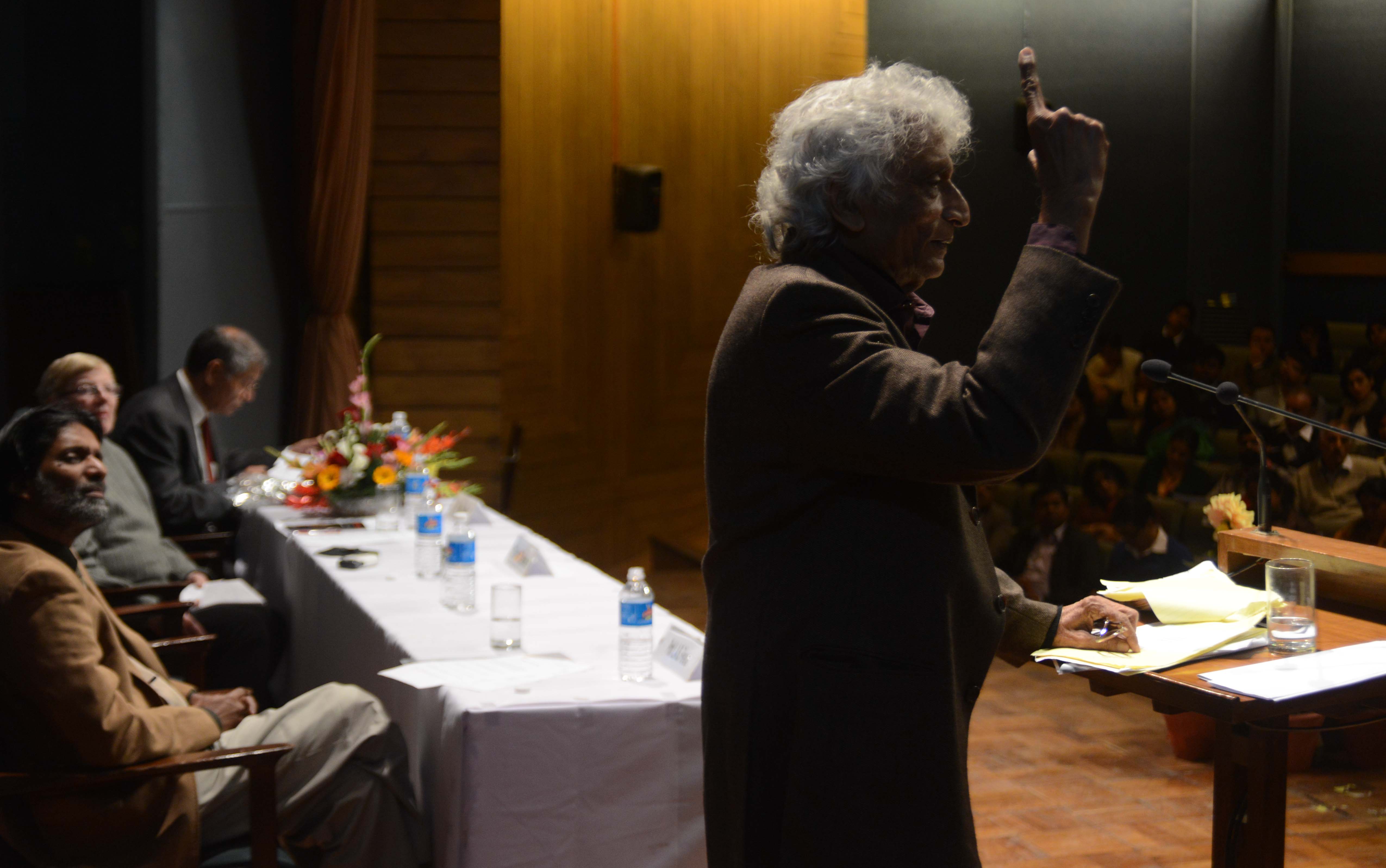 As the second leg of the program Faculty of Social Science conducted a unique interactive workshop on 1st February at Akbar Bhawan Campus of South Asian University in Chanakyapuri, Delhi. The workshop deliberated on the possibilities of doing ethnographic studies in the context of contemporary South Asia with its multiple crises and complexities. It emerged that ethnographic monographs can offer a mechanism to overcome the identity politics rife in South Asia. Prof. Obeyesekere made it clear that scientific arrogance is not a virtue in truly ethnographic practice. The social dogmatism too cannot rule an ethnographer. For, an ethnographer is ever aware of his/her ignorance and hence there is need to conjecture and analyze endlessly. No knowledge in ethnographic enterprise can ever be absolute. More importantly, the ethnographic knowledge production entails intellectually fruitful fantasies. Without those fantasies anthropologists’ methods and techniques become dominant and canons begin to rein the minds of ethnographers. No wonder that social scientists from the region of south Asia suffer from poverty of imagination as they are consumed by canonical notions of doing research and they sacrifice on intellectually necessary fantasies. Another aspect of the decline in the knowledge production is that market forces, international funding agencies and state have become instrumental in researches. It leaves no room for the ethnographers to go beyond the easily available empirical details. Hence what emerges in the forms of books is nothing but slightly tweaked versions of reports. These reports are, apparently, suitable for policy framing and planning. But they do not yield the necessary insights into the complexity of social, cultural and political. Hence, most of our researches, in anthropology as well as sociology, are feeding into the identity politics, by offering illegitimately simplified understanding. For, social reality encapsulates cobweb of complex meanings, such as the phenomena at Kataragama as mentioned in his celebrated book titled Medusa’s Hair. Unless that cobweb of meanings is unraveled in coherent, cogent, rational fashion, there is no knowledge of society; it is only knowledge by researchers, for themselves, of themselves. To make knowledge all pervasive, it is instrumental to bring in intuition and fantasies, going beyond the Cartesian claims of scientific rationality, and capture the complex lives of the people. If we do so as anthropologist, there is little room to play with politically correct categories, which have been bedrock of both modern social scientific dogmas and identity politics. Responding to questions and observations by teachers and students, at South Asian University, Prof. Obeyesekere made it clear that South Asian scholars have to continue with the efforts to break the politics of anthropology, which has defined scholarship at international scale. Reflecting upon his own intellectual dispute with Sociologist Marshal Sahlins, he indicated that there ought to be multiple disputes of this kind in every epoch of history. Instead of talking endlessly about the post-coloniality, and intellectually seeking for the voice of the subaltern in the complex texts, there is need of south Asian scholars to produce viable anti-theses to the theses of western masters. This is not to debunk the west; this is rather to offer perspectives, which have been located in faraway places such as Sri Lanka, India, Nepal, Bangladesh and other countries of South Asia.

It became evident that Prof. Obeyesekere is one of the most sought after social anthropologist in India on both days. The teeming number of young and aged scholars who made to the event and engaged with him was a vindication of his scholarly persona. The Contribution to Contemporary Lecture Series will continue to generate new insights in the knowledge production and transaction at this two-year-old university, which was started by SAARC in 2010.