New Delhi: A book launch event became the platform for eminent economists Prof. Pulin Nayak (Delhi School of Economics), Prof. G.K. Chadha (President, South Asian University), Prof. Prabhat Patnaik (JNU), Prof. Jayati Ghosh(JNU) and Prof. Jyotirmay Bhattacharya (Ambedkar University) to have an intellectual discussion on global economic crisis. The tone of the event was set by the book “It’s Not Over: Structural Drivers of the Global Economic Crisis” that was released jointly by Prof. Chadha and Prof. Nayak at the South Asian University campus in New Delhi. Published by the Oxford University Press, the book is written by Dr. Rohit, a macro-economic specialist from the Faculty of Economics, SAU. 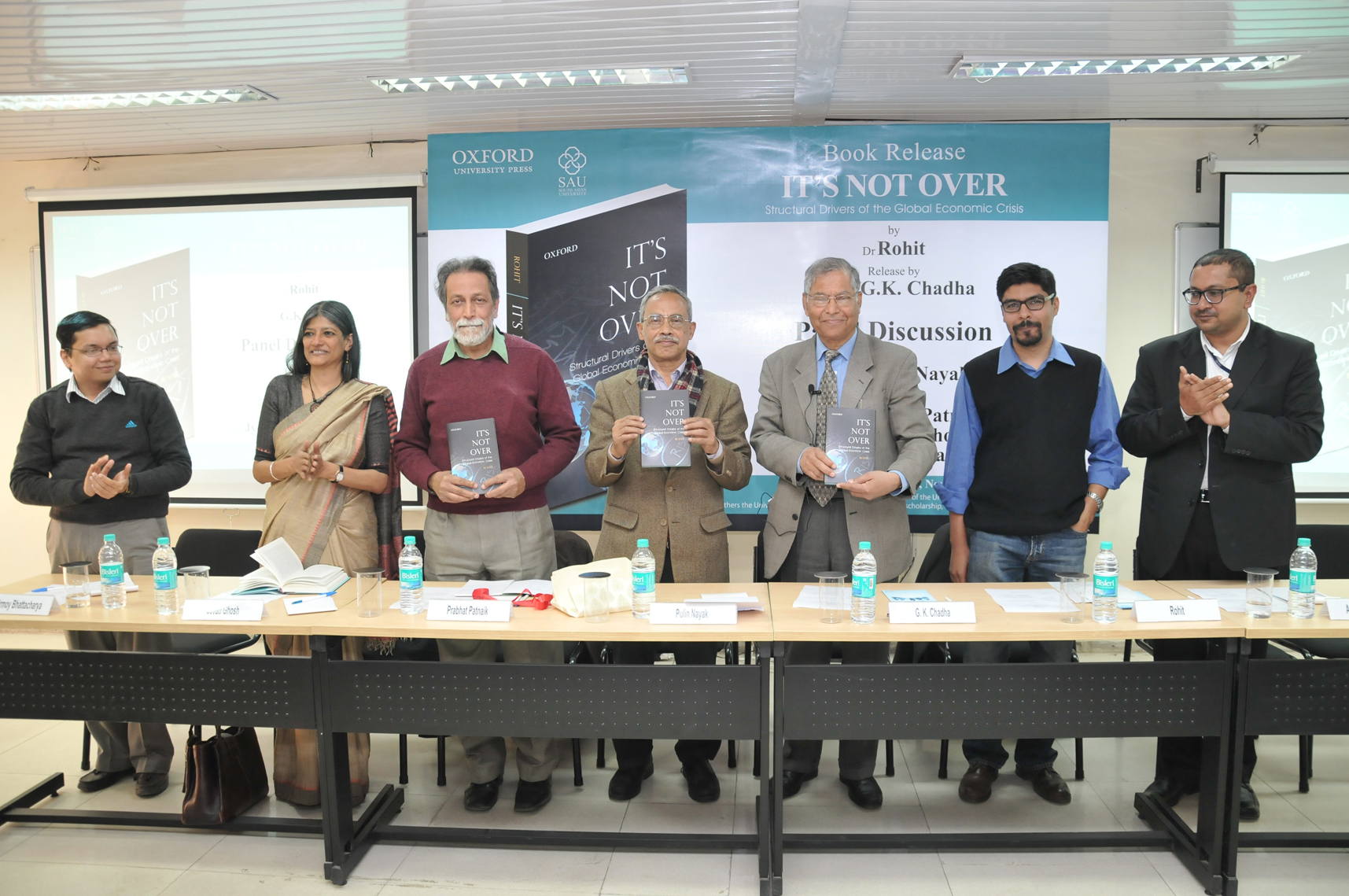 A panel discussion followed the book release where Prof. Chadha observed the analytical framework of the book. He opined that the book will be received well by not only economists but also by those who wanted to understand the financial malaise affecting the world today. Prof. Pulin Nayak, who presided over the panel discussion, commented that the book was unusual in the sense that it is about a developing country economist talking about the macro-economic policies followed by the US. The book, he quoted began with the Keynesian idea that governments should increase spending when incomes start to fall. He noted that unlike others who questioned the capitalist system itself, Keynes was not only believed in it but wanted to mend it. But in the 70s when Keynesian policies started to fail due to the creation of excess capacity and a rise in inequality, there emerged the Chicago school of thought which believed that the markets will always function perfectly. But the recent crisis has proven otherwise.

Prof. Prabhat Patnaik, an eminent macro-economist who has authored several books on the subject, pointed out that the book followed the Kaleckian tradition which saw the capitalist system as being characterised by “underconsumption”. He elucidated that underconsumption resulted from a stagnation in the economy caused by the shift of the income distribution from wages to profits. This shift entailed a fall in demand and a consequent fall in capacity utilisation. While on the subject, he emphasized that underconsumption today was more of a global phenomenon because real wages in America are influenced by the reserve army of labour in India and China. In earlier times, the stagnation tendency of capitalism was kept under check by either a massive state expenditure or by an expansion of markets in colonies. But today when all markets have been exhausted and Keynesian spending is no longer feasible, booms can only happen through “bubbles”. Thus, the book puts forth the argument that capitalism will not always be in crisis due to the emergence of another bubble.

Prof. Jyotirmay Bhattacharya recounted the argument of inequality of power mentioned in the book and how it prevented certain policies from being implemented. Thus, the inequality in access to intellectual property was causing a stagnation in the emergence of new innovations , which in turn was contributing to the stagnation in the capitalist system.

Prof. Jayati Ghosh argued that though the book explicitly talks about the US experience, the central arguments could be applied to other countries including emerging economies. She pointed out that the current crisis was different from other past crises because in recent times there have been changes in the nature of capitalism itself.

The panel discussion was followed by a question-answer session and a speech by Dr. Rohit.