Sundarban etymologically means “beautiful forest” has historically captivated attention of colonials (British Empire), Portuguese sea pirates, Mog bandits of the Arakan highlands and of late environmentalist, conservationist and nature lovers for its resplendent mangrove forest and the threatened Royal Bengal Tiger. It is a ‘hybrid landscape’ where the waters of two mighty rivers the Ganges and the Brahmaputra meet to form a bird-footed delta. Consequently, in the pre-colonial literature the delta seaboard has been referred to as the land of eighteen tides- atharo bhatir desh. In this water based artisan economy, the riverine communities are socially connected through dispersed village settlements and weekly markets (locally known as hut bazar). The rivers are not just channels of water; they carry a thriving trade, transporting people, goods and ideas from one part of the delta to another. A lot has been written and visually illustrates its flora and fauna. Still there is hardly any significant visual work that captures the lives of communities who struggle routinely to live with the fear of man-eating tigers, alligators, venomous reptiles and natural calamities like cyclones and tropical storms. The stories of people who inhabit the delta seaboard are heart-rending. They belong to the marginalised lower stratum of society and their livelihoods (fishing, seafaring, honey collection, wood cutting) are closely attached to the sea and the mangrove forest. Their life and struggle with nature can be best illustrated through pictures. The photo exhibition will try to address the absence of these communities in the contemporary literature on the Bay of Bengal through visual displays of their everyday life in villages, at sea and inside the forest. They occupy the liminal spaces of aquatic and terrestrial world and are placed at the ‘coastal frontiers’ where the state exercises panoptic control through maritime border patrol over its territorial waters and the Tiger Reserve with camouflaged infrared cameras. 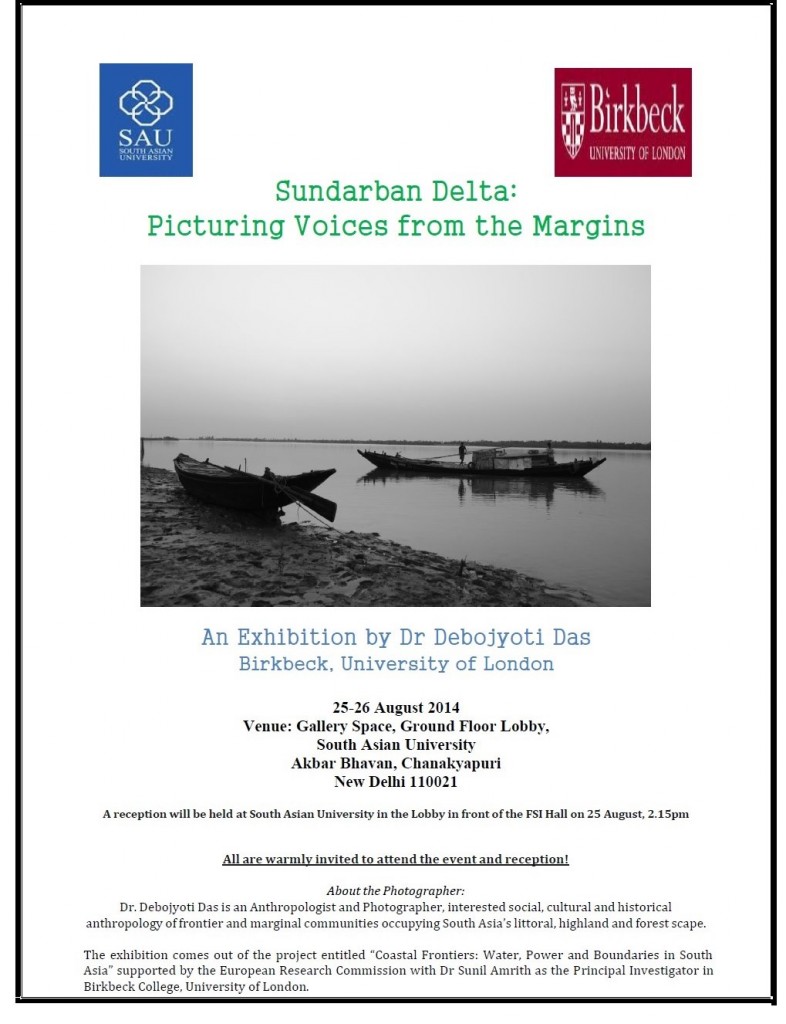 In the past decades the lives of communities living in the coastal belt has been radically challenged by transnational development. The powerful ship breaking industry in Chittagong is creating a massive livelihood crisis in Bangladesh’s Sitakund coastal seaboard, among the traditional fishing community, as toxic litter from breaking ships and land grabbing by power land mafia pollutes the coastal water depleting fish catch. Conversely in India the Sundarbans has been opened up for eco-tourism.  This has allowed unregulated entry of engine boats that cause oil spills and pollutes the pristine backwaters. Similarly the tourist flow has put up the demand for guesthouses and hotels in the delicate delta milieu. Also shrimp farming once a thriving business in the coast has significantly damaged the mangrove forest that act as a windbreak to tropical storms and cyclones. Both in India and Bangladesh human intervention and changing state policies in favour of neo-liberalization and globalizations have adversely affected coastal environment.

The photographs will bring to light the littoral community’s everyday struggle with the environment, their aspirations for improvement, local beliefs, customs, festivals, folk tradition, drama, theatre and syncretic religious practices of the Hindus and Muslims. The author took these photographs during his yearlong ethnographic field research in India and Bangladesh (2012-13). While the national and western audience has been introduced to a number of literatures on the delta illustrating its flora and fauna, this visuals deliberation of human societies will be a first of its kind. The photographs aim to highlight the social, political and economic life of the delta undermined in popular ecological and environmental discourses dominated by the Bengal tiger.

The photo exhibition will run at the in the Gallery Space, Main Lobby, South Asian University, Akbar Bhavan, Chanakyapuri, New Delhi 110021 during 25-26 August 2014.

A reception will be held at South Asian University in the Lobby in front of the FSI Hall at 2.15 pm on 25 August 2014.