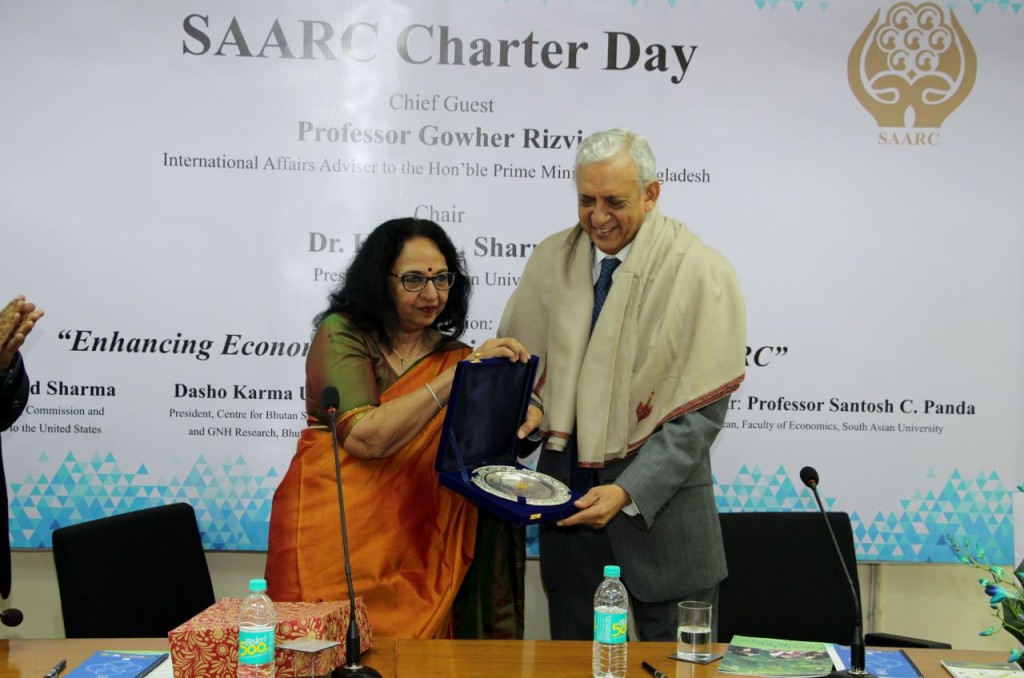 New Delhi: South Asian University celebrated SAARC Charter Day at its own premises, Akbar Bhawan, Chanakyapuri, New Delhi on 8 December. This tradition was initiated a year ago, by its President, Dr. Kavita Sharma. The event opened with an inaugural speech delivered by the Chief Guest, The Honourable Professor Gohwer Rizvi, International Affairs Advisor, Govt. of Bangladesh and was chaired by Dr Kavita Sharma. This was followed by a panel discussion with three distinguished panelists, Ambassador Dr. Shankar Prasad Sharma (Nepal), Dasho Karma Ura (Bhutan) and Professor Sumanasiri Liyanage (Sri Lanka), which was chaired by Prof Santosh C. Panda, Dean, Faculty of Economics, SAU. The panel discussion delved into deeper issues of greater regional integration and its nexus with security and peace in the region and beyond. There was also a short question/answer period rounding out the panel discussion. The concluding event of the day was a sumptuous lunch, held in the Akbar Bhawan gardens under the shades of a light ‘shamiyana’ cover befitting the mild early winter day in Delhi. The event was very well attended by diplomats, dignitaries, distinguished academics and the entire SAU community. 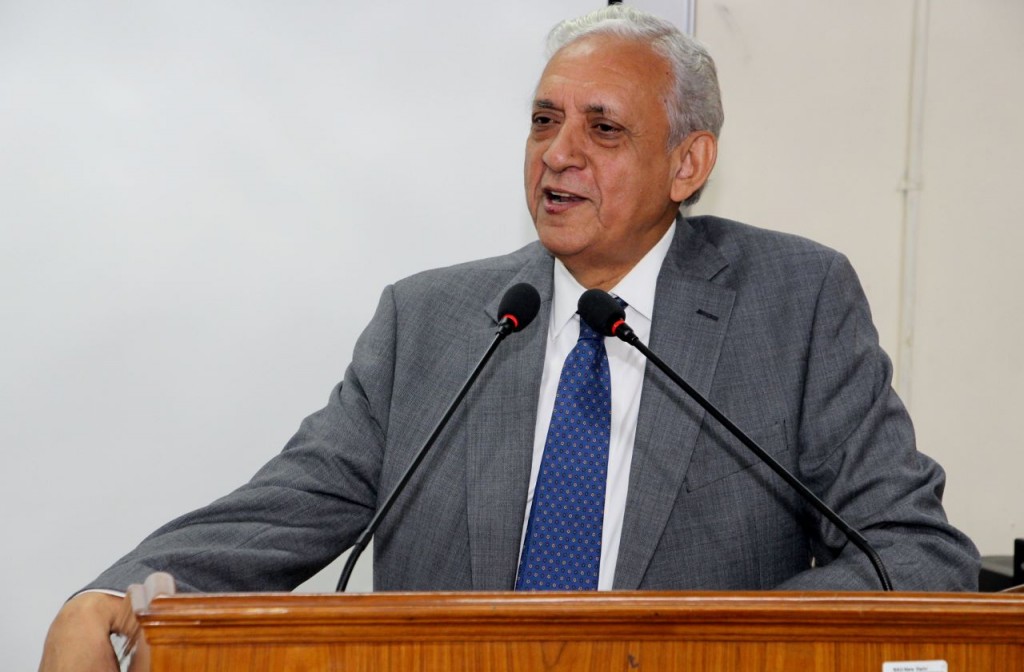 President Dr. Sharma by way of introducing Professor Gowher Rizvi, reviewed the origins of SAU and reiterated the umbilical relationship that exists between Professor Rizvi & SAU. He had fathered the original Concept Paper that preceded the founding of SAU. Dr Sharma went on to stress that while substantial progress has been made, much of the hard work of institution building remains ahead. She pledged her full commitment to seeing through the allotment of the first round of tenders by early New Year for the construction of the first five buildings in the new 100-acre SAU campus at Maidan Garhi.

All speakers who followed lauded the progress made by SAU in its first 5 years of existence and particularly complimented Dr. Sharma for the pace of recent progress. Professor Rizvi reminded all that the goal of academic excellence at the highest level for SAU was taken as a given by the original visionaries behind the idea. The greater challenge was to forge ahead and fully ingrain the deeper values among the evolving SAU community that has distinguished the region since the ancient days, namely the virtues of mutual harmony, diversity and love among all its peoples.

Turning to the SAARC accomplishments and prospects, Professor Rizvi made a number of important observations. Most problems, he stressed, that stare at us all, some more starkly than others, e.g., security, energy, water, trade, connectivity/transit, migration, are no longer suitable for unilateral actions. Concerted efforts are necessary to harness maximum advantages for each and all. If the entire SAARC cannot mutually agree on some measures, though that ought to remain the goal, sub-regional initiatives may still be launched such that others less convinced earlier may join in due course once the mutual rewards are evident. In this context, he highlighted the recent agreements between Bangladesh, India and Nepal, on one hand, and Bangladesh, Bhutan and India in areas of power and transit, respectively. 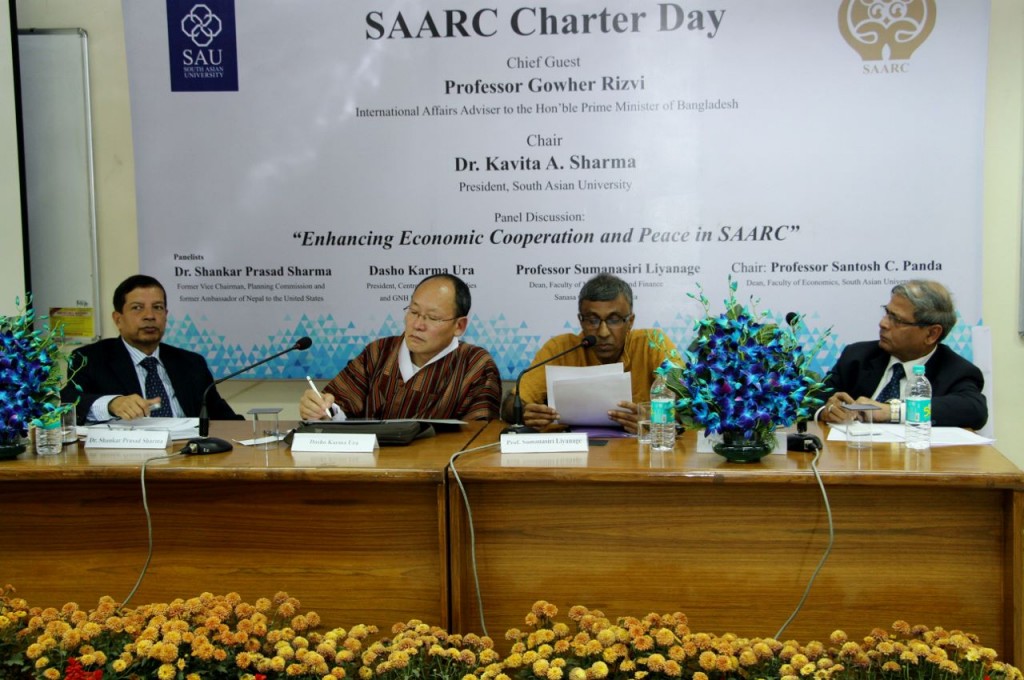 The panel discussion started with the opening remarks by Prof. Santosh Panda where he highlighted the importance of economic integration in attaining the twin objectives of peace and prosperity in the region. He put forth a view that increased economic cooperation can bring in peace into the region and detailed areas such as energy, trade and water where the gains of economic cooperation can bring rich dividends in the next five years or so.

Dr. Shankar Sharma happened to be a core member involved in the preparation of the draft instruments leading up to the 18th SARRC summit of 2014 held in Kathmandu, most of which were eventually adopted. It is the implementation that always lags behind and/or perhaps not put in effect with full vigour everywhere, concerns that he believed required greater scrutiny going forward. One common theme voiced by most speakers was that in view of faster economic growth in India over the past two decades, it ought to have caused a greater impact than evident on the growth and well-being of all other SAARC nations. To the latter end, the theme of the day could not have been chosen better, namely greater integration. Dr. Shankar Sharma in particular highlighted the relatively small and sluggish share of internal trade flows within SAARC, especially as a share of overall trade volume of SAARC countries vis-à-vis the world. Similar figures for FDI flows were even more minimal.

Dasho Karma Ura underscored the necessity to embrace full accounting of environmental dimensions, especially carbon emissions, the urgency to shift focus toward developing hydroelectric power, preservation of bio-diversity and commit to a stable population level as part of the roadmap to human progress. He lamented the conventional use of the metric of growth and GDP as deficient in that these do not impute ‘correct’ value to all inputs, human or material. He extolled the virtues of embracing wider methodologies in the measurement of ‘human progress’, where Bhutan has made a significant leap in developing the ‘Happiness Index’ that  takes into account, among other, the various  dimensions of inequality in society and the needs of the differently-abled, again very broadly defined.

Professor Sumanasiri Liyanage approached regional interactions in South Asia from a systems perspective, making a case why SAARC constitutes a veritable system with interconnected components that are often responding to developments in its strategic environment. Professor Liyanage examined a host of actors and issues through which such dynamics was borne out. In particular, he lamented the absence of an organic dispute resolution mechanism within SAARC. Overall, he offered a cogent critique of the challenges facing South Asia, both from within and outside that need to be addressed for greater regional consciousness and effective mutual integration.

In his concluding remarks, Prof. Santosh Panda remarked that even though SAARC hasn’t yet emerged as an economically integrated and vibrant entity, there have been some positive outcomes from cooperation and one such outcome was the creation of South Asian University. Quoting from “South Asia Development and Cooperation Report” he highlighted how the report lauds the creation of SAU as a mega successful project of SAARC cooperation and that it should be nurtured to blossom to its potential.

Prof. Rajiv Saxena, Vice-President, SAU proposed a vote of thanks to all the guests and mementoes were presented to the Chief Guest and the Panellists by the President.

The Full Gallery of the event could be accessed by clicking HERE.