Reproducing a piece written in September 2014 by Prof. H Hameed who had been a member of the Governing Board, SAU and the Vice Chancellor of the Maldives National University 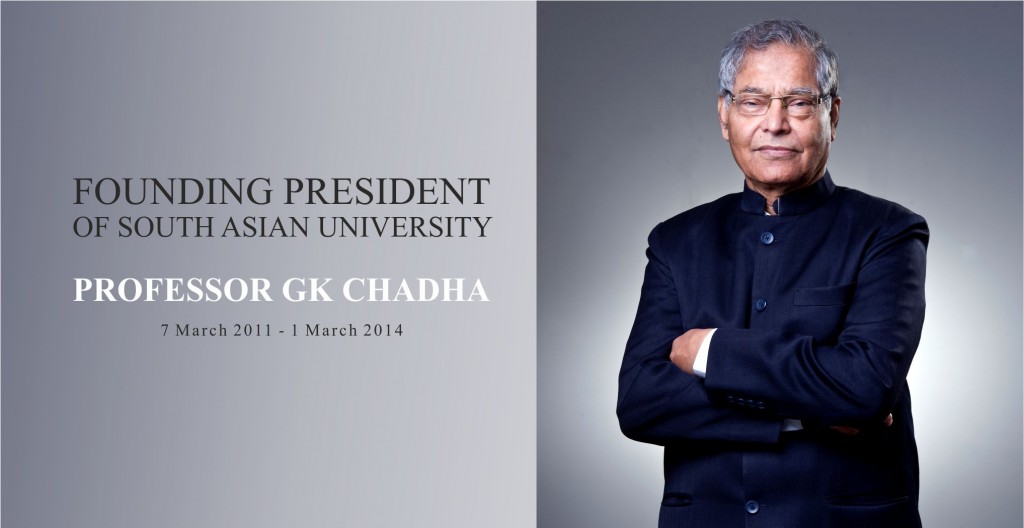 There is no better way to get to know a person than to travel together. This is probably how I got to know GK Chadha, the first President of the South Asian University well enough, and respected enough to write this obituary. When he visited the Maldives for the first time in 2009 for the Fifth Meeting of the Committee of Heads of SAARC University Grants Commissions, I felt it was important for him as the most possible candidate for the future South Asian University President to experience Maldives first hand, in view of the onerous responsibilities he had to shoulder to bring South Asia together in a small way — for that is what the mission of SAU essentially is. He was not the president then, for SAU had not been established, but he was in charge of the project office responsible for overseeing the SAU implementation. Though not a UGC chairman himself, I had invited him as a special guest to the gathering to meet with the chairmen of UGCs and to familarise himself with the issues at hand.

As soon as the meeting was over, I flew to the North of the country with Prof Chadha and the deputy vice chancellor of our university. One delegate was anxious wondering who would look after them till 2 departure since the two key conveners of the meeting were leaving with Prof. Chadha. I assured him that I had left them to the care of one of the most trusted managers of our university. In the North of the country, we visited several communities by a speed boat to see the other side of the Maldives—the side unseen and invisible to the tourists. Prof. Chadha was born on 10th June 1940, that is, long before the Partition. He remembered quite well the struggle for the birth of the two great nations of India and Pakistan. This struggle had affected many because it involved some sights and sounds which one would rather not remember. In spite of the experiences he had, Prof. Chadha was able to transcend the plane of the ordinary men to rise above and embrace humanity. Embrace, he did.

I recall a meeting where he met a Pakistani delegate in JNU Campus. He gave him such tight bear hug that the delegate’s spectacles which were hung from his neck by a string, broke. He organized to get the delegate a new pair of spectacles the next day. Mrs Chadha, a beautiful woman whom I had met a few times told me that Prof. Chadha was someone who showed his affection both in words and by his touch — a point borne home having seen how affectionately he holds the old haggard men and frail women we met in the trips; men and women he had never met before.

I met Prof. Chadha in one of the steering committee meetings to establish the South Asian Univeristy. It must have been seven or eight years ago. I had been involved in the SAU project since the first meeting. He was introduced as someone to lead the office to establish SAU. What struck me about him is his enthusiasm for the project, the enviable command he had of English and Urdu, and the advanced communication skills he had. He was a tall handsome and effusive man who loved people; and that showed in all his interactions. Another outstanding trait of his personality is his humility.

Upon meeting him, one cannot but be impressed with his sense of deep gratitude, his humility and broad understanding and appreciation of human affairs. On visiting his home, I was touched by his graciousness to guests and his ordinary living conditions. These attributes endeared him to all he met.

We were later to learn that Prof. Chadha had been a professor of economics for 22 years at Jawarharlal Nehru University ( JNU), and was a vice chancellor of JNU. In youth, he was a brilliant student. He had written over 16 books and many academic articles. It is not my intention here to recite his many accomplishments and achievements in life for these are readily available on Internet.

Together with Prof. Saxena who had known and worked with Prof. Chadha for a long time, the SAU Project Office seemed to have the prudence and financial astuteness setting up a new university would demand. These qualities are important to orienteer in the jungle of redtape, New Delhi bureaucracy is somewhat “famous” for. Prof. Chadha is also well known among the academic circles and had access to the power corridors of the Indian government being a colleague of the then Prime Minister.

Every one of us must die, for none lives forever. In my opinion, Prof. Chadha would have liked to have died while working. For all I know, he had been a workaholic all his life. I once visited his home and met his dear wife. When I remarked that Prof. Chadha came late from work, she told me that he had been so all his life. Prof. Chadha was a higly motivated, energetic person in spite of the long experiences he had had. He outworked people half of his age. He told me that life had been kind to him throughout, and he was in the SAU project only because it was a project larger than himself… larger than anyone of them. It was the SAU mission that propelled him to keep on working so hard so long, which ultimately and untimely killed him. No matter how old or young we are, there only two choices for each one of us: get busy living or get busy dying. Prof. Chadha chose the former, well aware of this age. He was very passionate about SAU. He wanted to see SAU succeed and established before his time.

On 1st March 2014, he died in a heart attack. The actual circumstances are unknown to me and unnecessary to know. Prof. Chadha had lived his life meaningfully. He was a professor of consequence. My life has been enriched by my meetings with him. By his example, he showed me, and all of us who had met him, that only a life lived for causes and others is worth living.

I think his last wish would have been that the great mission of SAU to continue… not to let temporary setbacks, including his death, deter the living from the great tasks ahead of them. Rather that we take increased devotion to the cause of SAU for which he gave his life.