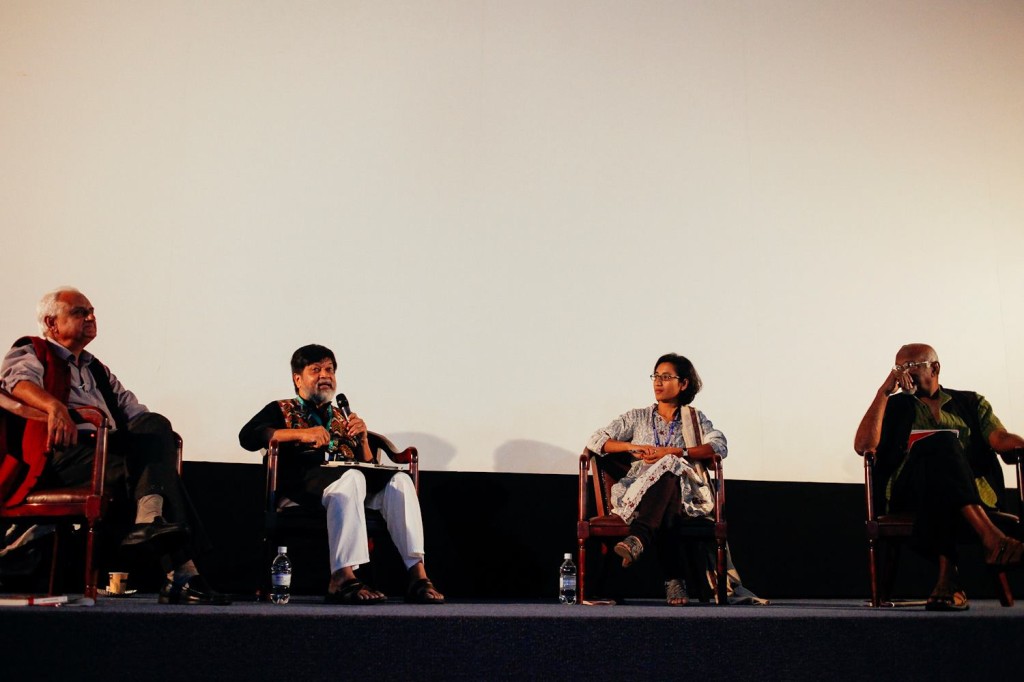 This session was also the official launch of the latest issue of Himal Southasian magazine, fittingly titled “Under the Shadow of the Bollywood Tree”.

Kanak Mani Dixit, chairing the discussion, opened by commenting that recently, the concept of Southasia has begun to gain texture and traction. Himal Southaisan has promoted the idea of Southasianism for over twenty-five years, and has been activist as well as journalistic in spreading this concept. He pointed out that a blurring of the boundaries of Southasia is even visible this year in the FSA programme, in which it is not always easy to discern exactly which nation-state the films have come from. The films are regional, not nation-specific.

In yesterday’s FSA opening, Mani Shanker Aiyar stated that Southasia is understood by peoples’ differences from each other. Panelist Sadanand Menon responded to this by claiming that what unites Southasia is the undying love of censorship. Governments not only try to impose it in their own states, but are also able to persuade their neighbours to engage their own censorships. India, of course has what Sadanand called the “new beast” called street censorship, of mobs imposing their will. Kanak suggested that north Southasia is the “problem-child” of the region, perhaps North Southasia and South Southasia may be an appropriate way to divide the region conceptually, but Sadanand Menon pointed out that although South Southasia has tended to be freer of the extreme violence of North Southasia, these divisions are still too broad.

Kanak suggested that the overarching concept of Southasia works on a macro-, intellectual level, but that he has found that the closer one gets to the grassroots, the more important the regional becomes. Shahid Ululam agreed. He commented that if India and Pakistan play cricket, Bangladeshis are evenly split in who they support. India is not well-loved in Bangladesh, something that surprises many Indians he has spoken to. Local issues are far more important to most citizens than national-level ones. Further complicating what the regional and the national means, Shahid Ululam stated that has found ‘Bengal’ a more useful concept than ‘Bangladesh’ in promoting his Dhaka-based photography centre to outsiders. Bengal is widely recognised, it has historical and cultural currency, whereas Bangladesh connotes the image of Kissinger’s “basket-case.”

Mallika Shakya spoke about the teaching that goes on in the name of Southasia. Ethnicity, religion, linguistic nationalism all have quite different understandings and academic engagements in each nation, so teaching the concept of Southasianism can be a challenge, but one that is more suited to be taught at the South Asian University in Delhi than other more ‘national’ universities, because of its outward-looking focus.