An Evening of Reading and Discussion

The poetry reading and conversation evening Echoes of Silence was held on Thursday 18 December at 6.30 pm at the FSI hall, South Asian University, Delhi. The programme sought to retrieve lost and often unpleasant memories to give shape to the echoes of silences teeming all around us. As the world continues to struggle to make sense of the extent of inhumanity at Peshawar, ‘Echoes of Silence’ affirmed the role of poetry and art to bridge the polarised world. The evening brought together two eminent writers: Tamil poet from Sri Lanka Dr. R. Cheran and English novelist Dr. Vikram Kapur  from India. Both writers have worked closely with ethnic and religious polarisation in their respective spaces, often using their creative work to articulate the hushed voices. The conversation that followed the readings was chaired by Dr. Kavita Sharma, President of the South Asian University. She opened the evening with one minute of silence for the victims of the recent Peshawar Attack. 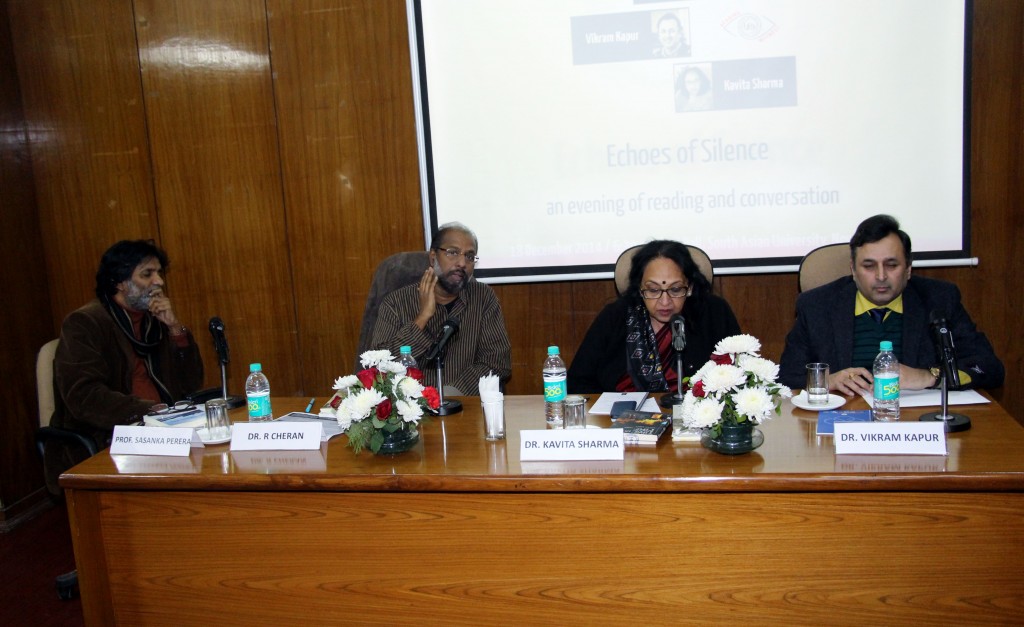 Vikram Kapur, novelist and short story writer, whose fiction predominantly deals with the exigencies of communal violence in India, read from his short story ‘Accidental Lives’ in the context of the 1984 anti-Sikh riots. The story evoked a sense of how the dynamics of intense personal relationships change in the face of the polarising impulses of religious extremism.

Cheran started his reading with the poem ‘Children’, which looks at the conditions of children in conflict zones. He also read out poems which stemmed from the human rights violations in the last phase of the war between the Sri Lankan army and the LTTE. He offered a glimpse into his poetic journey, by connecting a string of poems in the context of some of the most compelling events in the history of South Asia.

Responding to the readings, Kavita Sharma, the Chair, underlined a sense of guilt which the readings evoked in her, and hoped that the human kind would eventually overcome the barriers that divide and usher in a sense of togetherness.