The fundamental objective of the proposed conference is to systematically probe the repertoire of possibilities that the media (both print and electronic as well as the new social media) may offer in terms of both contributing to and helping sustain an ecology of mutual understanding in South Asia. The media in South Asia like elsewhere in the world does not operate in a political vacuum. It is faced with distinctive challenges and a political grammar that is in some respects unique to the region.

Ours is a region of immense potential evident in terms of its demographics and the relatively large presence of a younger population. It is inevitable that given the sheer scale of its habitation that it cannot afford to be ignored globally while thinking about solutions to key global dilemmas. One illustration would be the climate change issue but one could also think of several other big ticket issues that pose a global challenge often requiring support at both the regional and local levels. This is indeed not surprising to any observer given the prevailing levels of economic development and the corresponding problems of securing a decent livelihood for a vast majority of its citizenry.

However, despite considerable cultural overlaps and commonalities, often similar issue-areas tend to be viewed differently depending on the vantage point of the observer and where one is reporting from. One of the questions the conference shall seek to critically evaluate is what constitutes responsible reportage in South Asia. How can the media go beyond conventional stereotypes that circulate in the region and give a positive nudge to increasing the prospect for a more nuanced understanding of specific predicaments that face the region? We also invite our conference participants to offer provisional responses to how the media can contribute substantially to the requisite conditions for peace and economic wellbeing in the region. How do the politics and the ethics of reportage intersect when it comes to covering events and ongoing developments in South Asia?

The issue of images is not a trivial one. Even within the region the perceptions individual countries have of themselves and the images other countries in the region have of these individual countries might offer us an interesting peg to structure a more open conversation regarding future possibilities in media story telling. The media works under its own regime of pressures – whether these are TRP ratings in the television industry or the pressures of breaking news, just securing the right sound bite or self-imposed censorship. Journalists are involved in a tight rope walk. Curiously inclined philosophers and social scientists have also had a long tradition of grappling with the question of what constitutes reality. Without getting waylaid by these rich debates, we still need to know what constitutes fair reporting and editorializing in a world of competing representations.

We at the South Asian University see it as vital to strengthen bonds within the region and forge a broader regional consciousness. We are keen to understand South Asia on its own terms and not be overly swayed by one dominant narrative or the other. We would like to arrive at a balanced picture of the region and we recognize the media plays a major role in order to realize this goal. We would also in this context like to draw on the expertise of our conference participants to consider what skills would be essential for the next generation of journalists emerging from South Asia. How can they eventually reach out more persuasively to the people of the region and bring them closer to each other. How can they contribute to a sense of a shared South Asian Consciousness among future generations in the region while retaining sensitivity to diversities?

In this context, our effort is to invite some eminent journalists from around the region to engage and help us and all concerned citizens of South Asia think through how the media may further mutual understanding in the region. We are keen to learn more about the available tools at the disposal of the media today. We also would like to ask how has the notion of the ‘publics’ itself altered in recent years especially in terms of both the production and consumption of news? What constitutes newsworthiness in the region and how do the state and the market in South Asia determine newsworthiness? These are perhaps some of the dimensions that are worth paying greater heed to during the course of the conference. We would like to reiterate that all these questions are in our understanding tied normatively to our fundamental goal of advancing mutual understanding in the region. Conference participants might pick and address any theme that is specifically of interest to them but would be encouraged to anchor their thoughts in relation to the overall concern of strengthening regional mutual understanding. 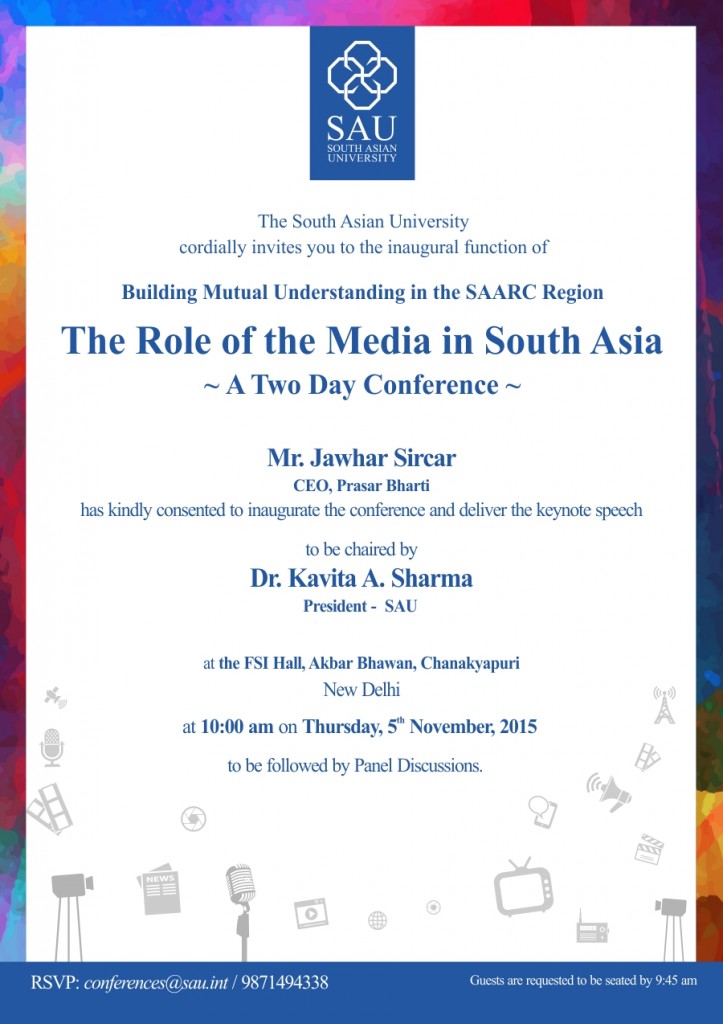 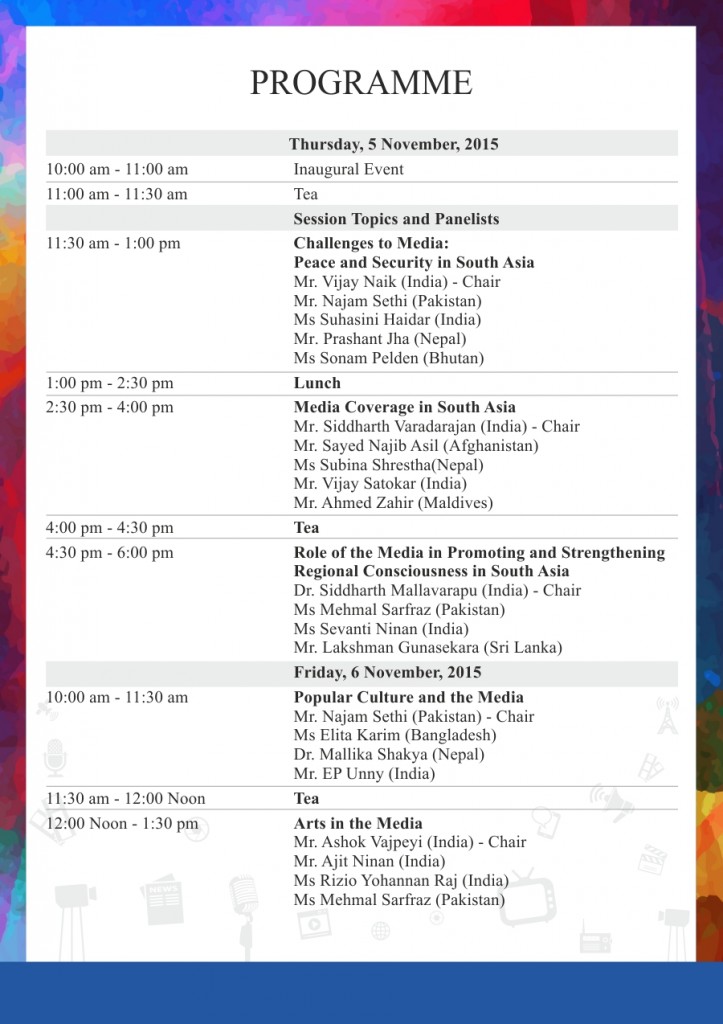